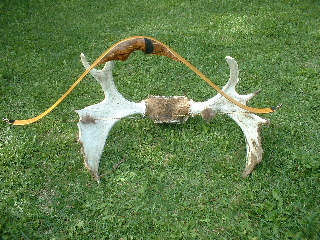 The 46" Stalker Recurve from Rodney Wright Archery is the smallest bow I have reviewed to date.We often hear that short bows are hard to shoot, have excessive finger pinch and are not acurate. WE did not have these issues with the stalker . I found that the stalker was a great little bow to shoot.The Stalker is not a bow for shooters with a draw length of more than 28". It draws very smooth to 28" and then hits a wall.It does not stack , it stops.
With an AMO of only 46" and a strung up length od 40" it is idealy suited for what it's name implies,stalking. This bow is also ideal in any close quarter situation where our normal length bows are hard to shoot.In a blind it is the easiest trad bow to shoot that I can imagine.The typical limb clearence problems with longer bows are not there. In heavy cover it is very manouverable , making clean shots possible where other bows just could not get limb clearence.
The very large brace height makes the stalker very easy to like. This is a factor that I feel helps reduce the finger pinch issue. We all shoot 3 under, and that is an advantage with pinch also.
The craftsmanship on the Stalker is flawless. Rodney does not cut corners.Glue lines are perfect,and the finish is impecable.The ARMTEX clear glass is flawless and clear without the streaks and spots we find in other glass laminations today.
We shot the bow extensivly before this review was written and have not one complaint with it other than the draw weight. A heavier weight would have been preferred but this is the bow that was avaliable. Shannon liked the stalker so much that he chose to hunt all fall with it even though he had free access to some very high performance bows in draw weights that would be considered a better choice by myself and other hunters. He was concerned with not being able to shoot a heavier bow because of shoulder injury's.  His success story is below.

If the Stalker had been a heavier draw weight I would have been hunting with it,instaed of Shannon, but I chose not to , only because of the draw weight.

For those that hunt in close quartess, thick bush and blinds the Stalker is an ideal design.It is completely shock free, quiet and extremely manouverable.Turkey hunters will love it. You can even sit flat on the ground and shoot straight ahead without any worry of having to cant the bow to get ground clearence.

46” Stalker Recurve By Shannon Kuzik
I have always been a fan of short bows and when Pete called and told me that Rodney Wright was sending the 46” Stalker Recurve, I couldn’t wait for it to arrive.  When I first saw it, it looked like a kids bow, small and very light.  It is 41 pounds at 28”, a little on the light side for moose and elk but I was up for the challenge. Shoulder injurys have made shooting with heavier poundage bows a problem this year and the Stalker was a bow that I could draw and shoot without any difficulty. It seemed a better choice to drop the draw weight and shoot acurately than to run into trouble with a heavy draw weight that I could not handle properly.
I had to buy new arrows to match the poundage of such a light bow but once I was able to tune my hunting arrows, the bow shot quiet and extremely accurate, I even had my first traditional Robin Hood.  My hunting arrows weighed in at 497 grains with a 125 grain, 2 blade Magnus Broadhead.
When hunting season came, I started chasing elk first.  I hiked over 150 km and had some close calls but no success.  In early season the bush is so thick that you could be 5 yards from an elk and not get a shot.  I guess that is why they call it hunting and not shooting. 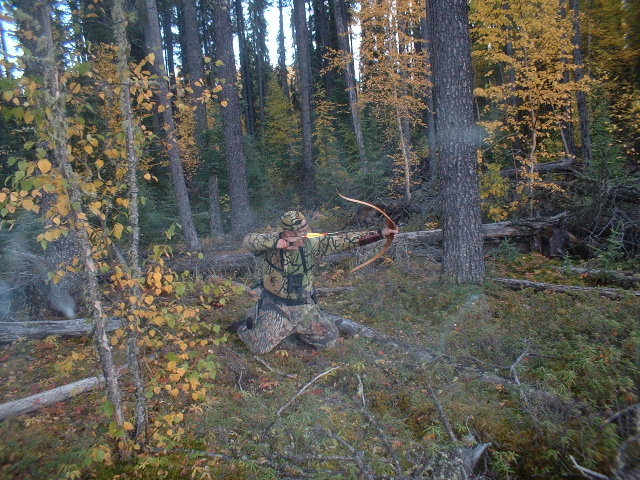 Elk hunting with the Stalker
My main goal in 2005 was my bull moose.  I waited 8 years for my draw and I finally got it.  I was looking for a bull moose with at least a 50” wide rack and I was willing to go home empty handed if I did not see one.
September 24, I started hunting for my bull moose.  I saw 3 bulls the first day; the biggest was a 45” wide.  I even had a 35” bull broadside at 8 yards which was so tempting but just not the one.  I had lots of bulls well within bow range, a 38” at 10 feet and a 40” at 15 yards.
My second last day, I had a nice 45” bedded at 40 yards… but still he wasn’t the one.  I was starting to think that I had made some bad decisions by not taking one of the many bulls that presented broadside shots.  I walked over 230 km throughout my hunting season, saw 83 moose, 3 bulls over 50”, one at the magic 60” mark that would have scored around 200 P&Y, but no shot.  That bull still haunts me in my dreams at night.
Only one day of hunting season to go.  I left my truck at and started my last walk into the pitch black bush.  I had a 2 hour walk in front of me before I reached the swamps where the moose hung out.  My plan was to still hunt the game trails, just like every other day.  It had worked for me for the last 9 years that I have been bow hunting and I was hoping that it would not fail me now.
I was still hunting up a steep hill on a game trail, peeked over the ridge and there he was, moose number 84, broadside looking away from me.  Now I would like to say that I made a perfect stalk or called him up from 200 yards away but I didn’t, I was just in the right place at the right time.  I grabbed an arrow out of my bow quiver; it took me 3 tries to put the nock on the string.  When I looked up, the bull was staring at me trying to figure out what I was.  In one fluid motion, my finger touched my lip and the arrow released sinking into the bull’s right side.  He spun 180 degrees and ran into the bush.  I had no clue what had just happened, it all happened so fast.  I knew he was a good bull but the arrow didn’t look like it penetrated enough.  I was shaking like a leaf.  I started to think that I hit a rib or the shoulder blade; I didn’t even know how far he was.  That is when I heard crashing sounds… then quiet.  I regained my composure and walked 10 yards to where the bull was standing.  I made the decision to go in and see if there was any blood on the trail.  To my relief I spotted blood 10 yards in and lots of it, which made me think that I hit a lung or maybe both. 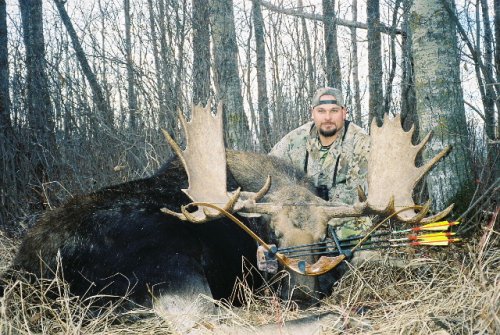 Then, there he was, only 40 yards away with the arrow  half an inch behind his right shoulder blade.  The arrow hit the far shoulder and bent the Magnus broadhead which is why it didn’t look like it penetrated enough. 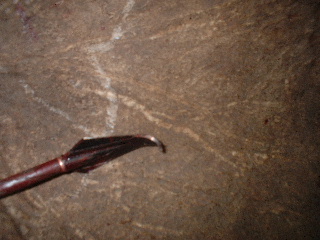 If I didn’t hit the shoulder, I am positive that the arrow would have gone completely through the bull.  The bull measured 51” wide and scored 163 P&Y.{green} 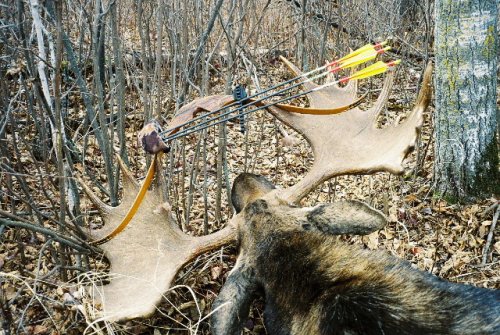 Stalker and Shannon's  moose
Thanks Rodney for making the 46” Stalker Recurve.  I have been looking for a short bow like this for years.  I just showed that you can take a large bull moose with a short, light poundage bow.  You definitely have to pick your shots and wait for a broadside or quartering away target.  A 50 pound at 28” bow would be better suited for moose and elk .  I definitely would recommend the Stalker Recurve as a hunting bow.  I got a lot of attention from other hunters all asking who makes that bow and the answer… Rodney Wright.
SHANNON KUZIK
LICENSED BIG GAME GUIDE
PRODUCT TESTER
Stalker chrono results 41# at 28"
Note  I only used 2 arrow weights for this review because of the light draw weight of the bow.

"Welcome to my outdoor world"