Test bow: O.L. ADCOCK ACS LONGBOW,60" 54# @ 28". The ACS design Longbows by O.L Adcock has received a lot of attention since its appearance . Much has been said about this design, from praise to skepticism.

Often the claims of superior performance are considered marketing ploys, and not reliable. We all hear claims of greatness and often find out that after we spend our hard earned money that the claims are just that, Claims , and they can not be reproduced with the bow that we purchased. 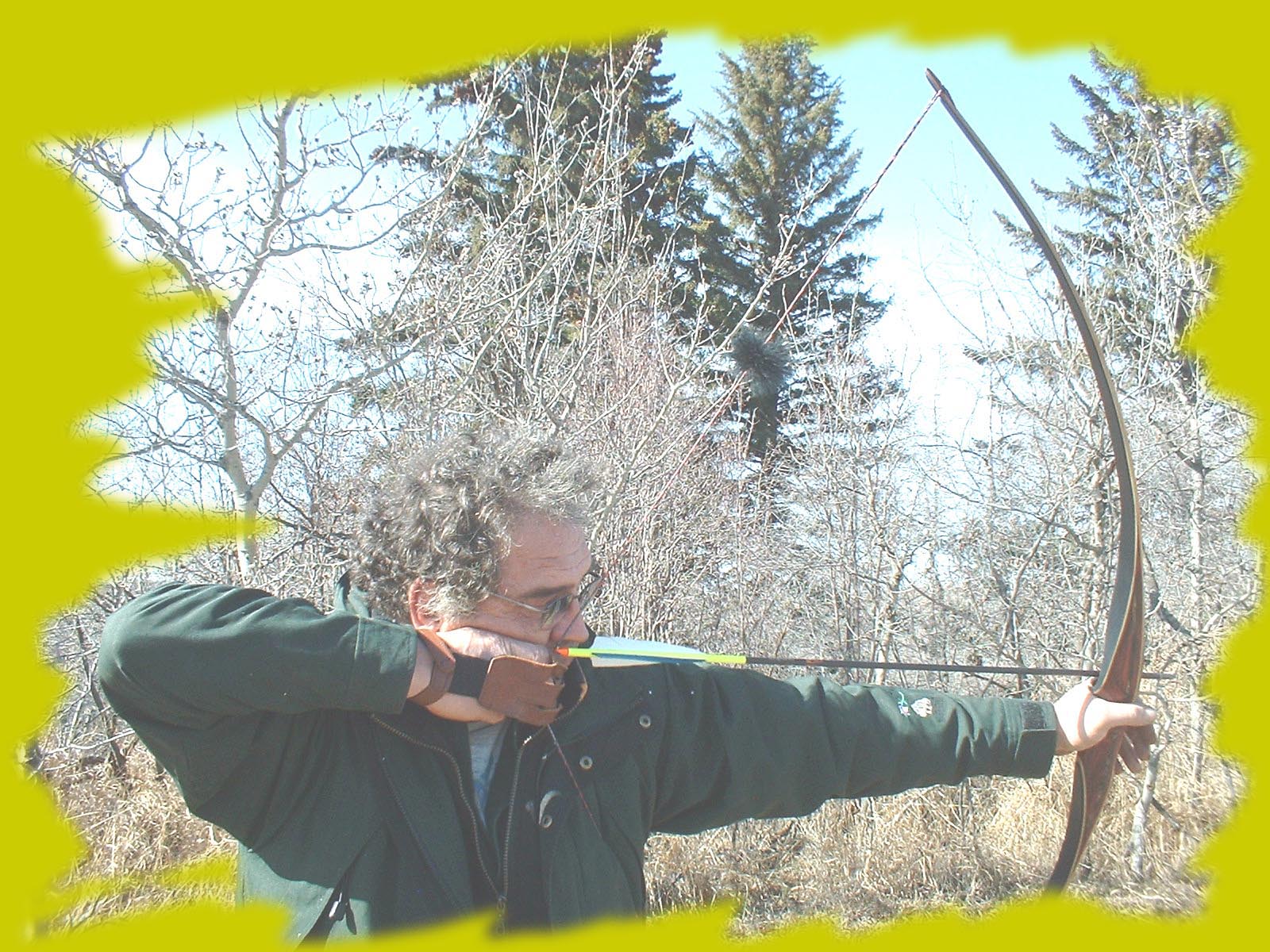 If you think that I am going to slam the ACS at this time you are wrong! This is without a doubt one superior bow design. The bow I received to test is a beautiful piece of craftsmanship that shoots an arrow like nothing that I have seen before. Hand shock, and vibrations are non existent. Speed?, its in a class of its own. This medium weight{54#] bow will shoot a 413 Grain arrow at well over 200fps.Actualy at my draw length,27" the bow makes 53# on my scale  and launches that 413 grain arrow at 198 FPS .At 28" it shoots the 413Gr arrow at 211 fps. With these light arrows it is still quiet and dead in the hand after the shot.

I also wanted to see how well it handled a very heavy arrow so I decided to insert a carbon shaft complete with a 125Gr point inside a 2117 aluminum shaft. This made a hefty 875 grain arrow that felt like a fence pole. At the 53# draw weight and 27" draw length it shot it at 139 FPS, clearly showing that it likes heavy weight arrows as much as it likes light weight ones.

My preferred arrow weight is around 650 grains and here is where I did most of my shooting with the ACS. It shoots these at an impressive 171 FPS. Remember this is from a longbow being drawn to 53#!!.My past experience has shown me that to get this performance that I needed to shoot a recurve with considerable more weight. I have not seen a recurve or longbow at the same rating that will shoot as fast as the ACS to date. If one exists I would love to try it. 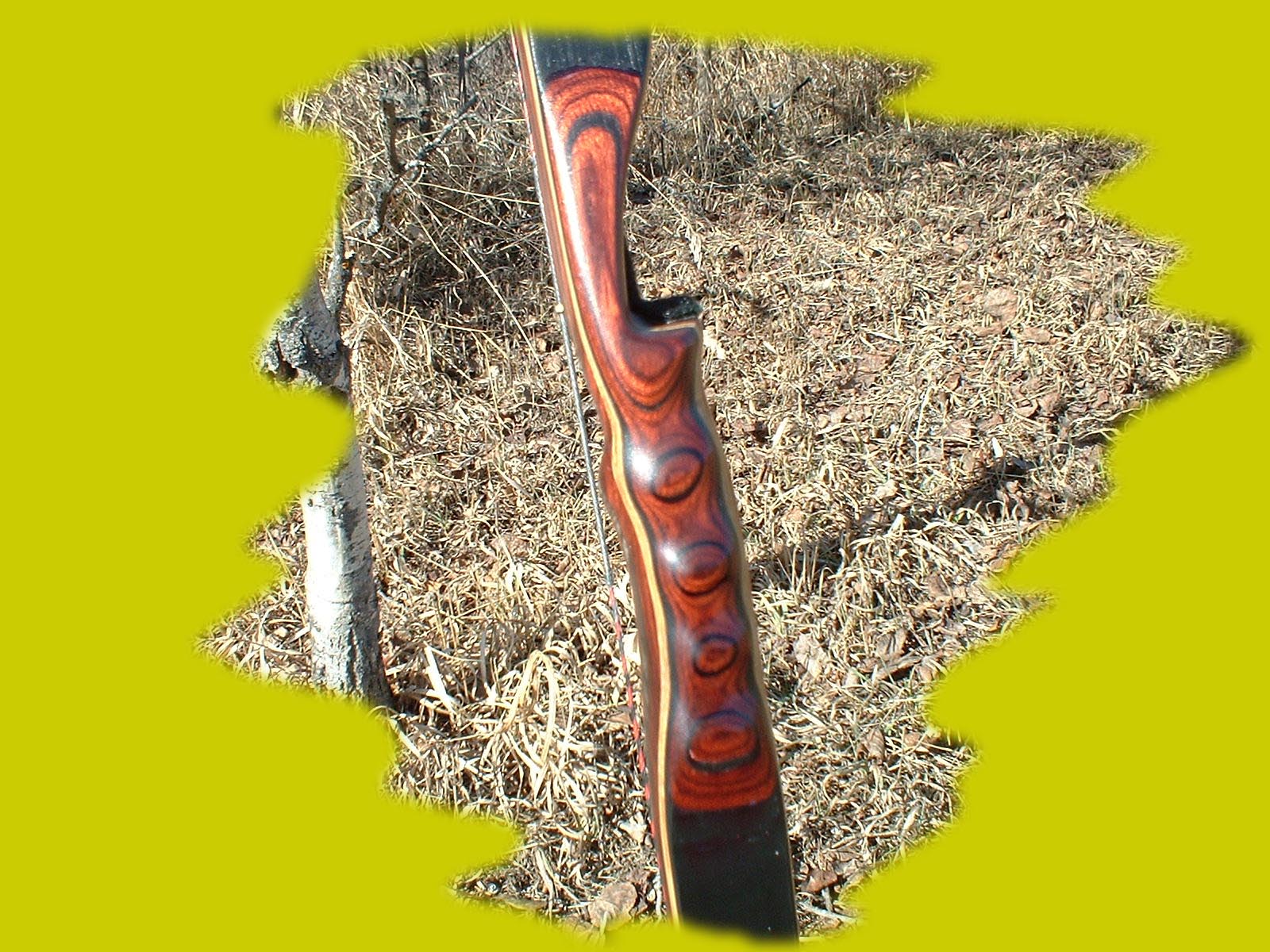 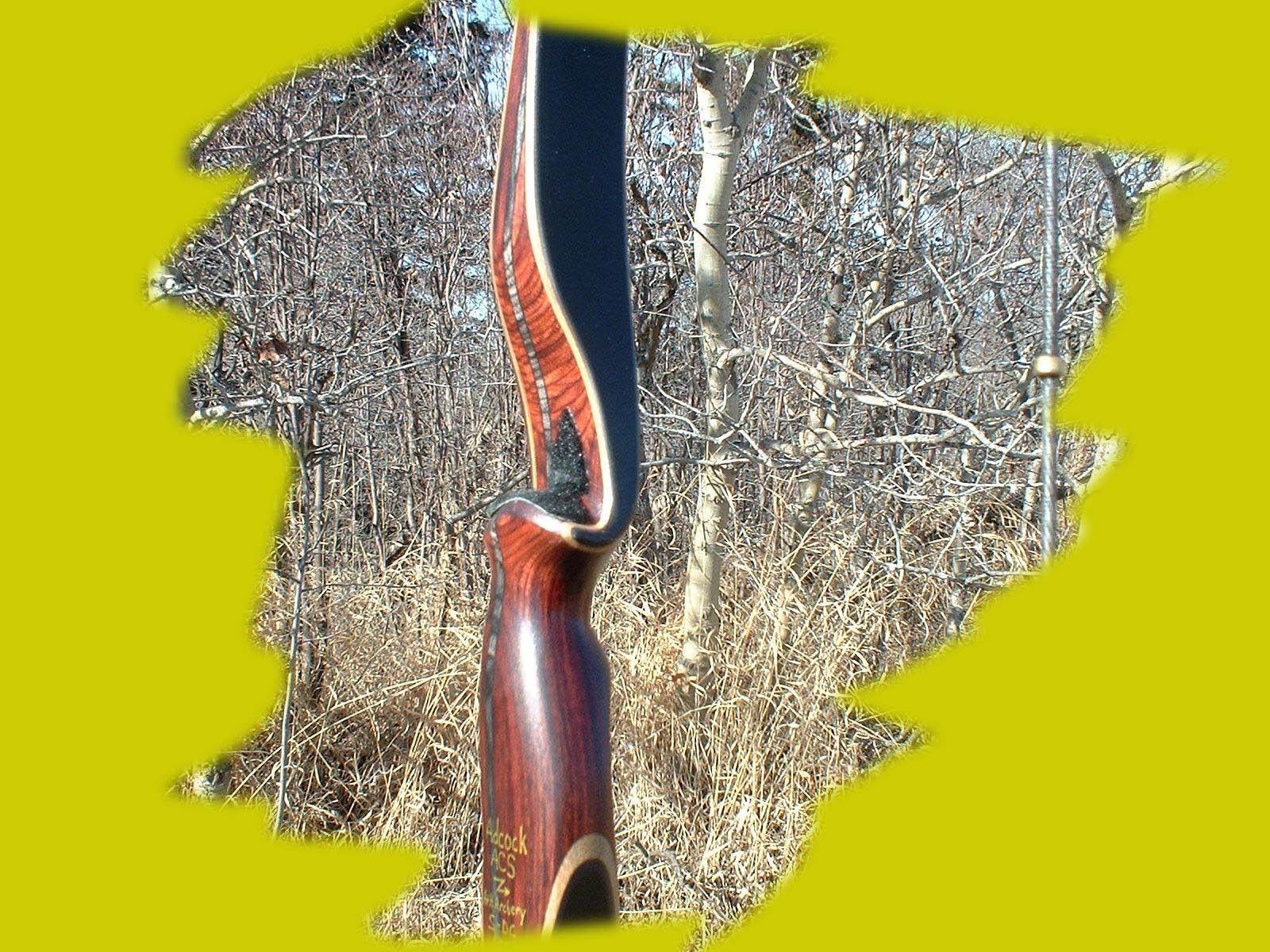 The workmanship and design are that of a true craftsman. O. l. Adcock has been respected by his peers and customers for years for his quality bows and this will continue well into the future. The riser is simple, yet it is also a beautiful piece of work. It is made from Burgundy Rosewood / Diamonwood with a grey accent stripe that varies from light grey to charcoal. The honey colored actionboo limb cores run the full length of the bow's riser adding another accent stripe.

It fits my hand like it was molded for me. The shelf has a pronounced crest that provides good clearance on release and the thumb grove is functional yet small blending well into the design. The finger indents and slight palm swell add to the comfortable grip and shootability of this bow.

The main feature of the ACS are the limbs.
They are Thin, Real thin, and they are curved across the face. It is the curve in the limb that gives it the performance it has, and it's patent protection. They look like a slender limb with a fine taper to the tip at first, then you see the curve. It is not large, but it is noticeable and functional. The test bow I have is made with Actionboo cores with double carbon overlays. 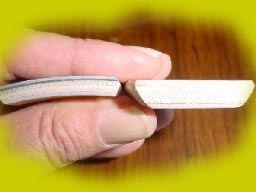 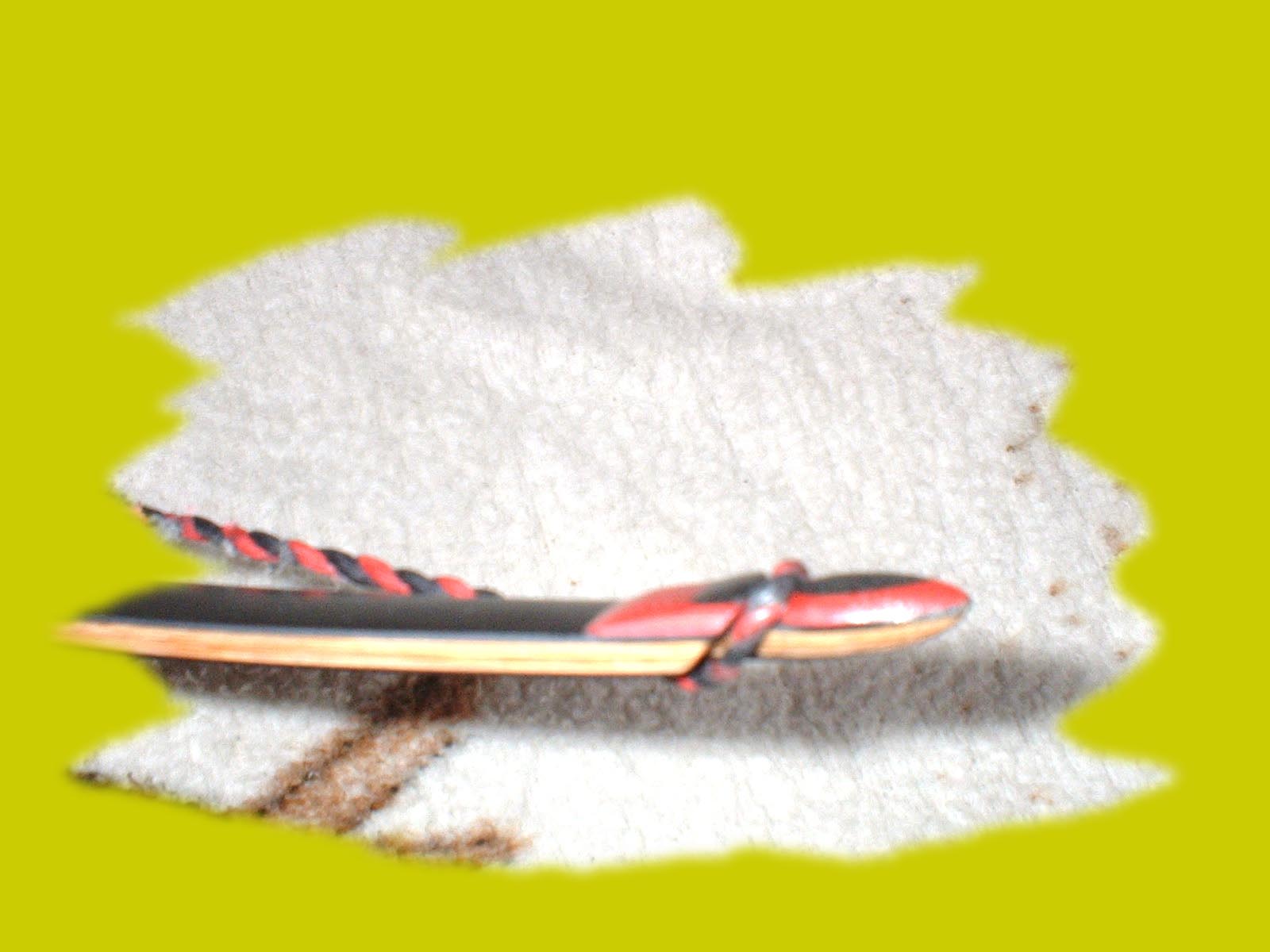 If you think of how easy a flat piece of material like steel flat bar bends and then see how much stronger it becomes if you put a bend in it like angle Iron you will understand how such a thin limb can store so much energy. The curved surface running from the riser to the noc gives the limb a thickness equivalent to a much thicker limb. The limb measures .275" at a point across its face near the noc, however when the edge thickness is measured it is only .240" thick at this point. This may seem like a small difference but it is enough to add considerable strength and reduce the mass of the limb. As we know a heavy limb takes more energy to return to its shape than a light limb. The ACS design both reduces weight, and adds strength at the same time. In short the ACS feels good, looks beautiful and shoots wonderfully. 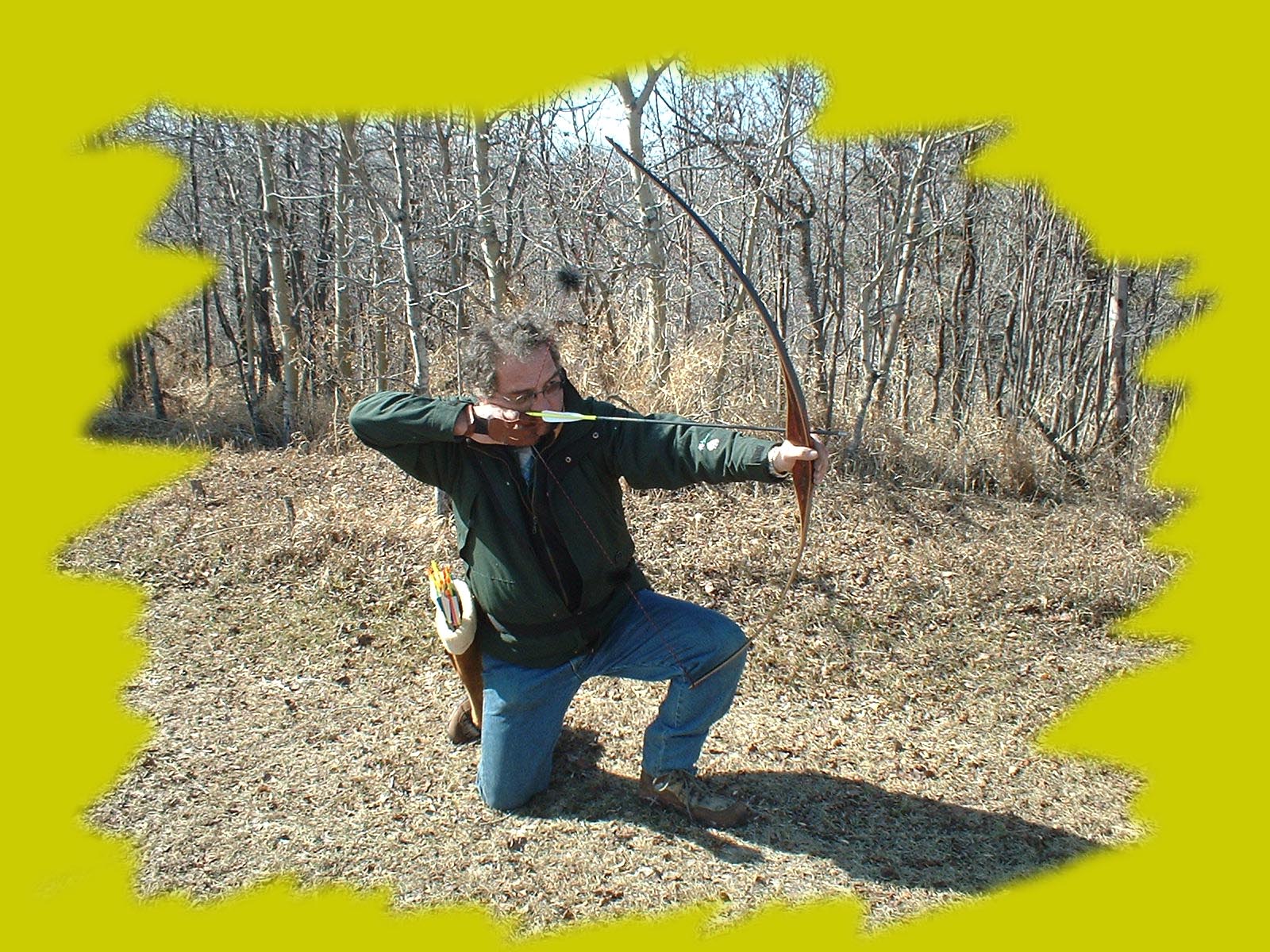 I have been shooting the ACS for a couple months now and have been trying a lot of different arrow combinations, from Aluminum, Cedar, Australian Silverwood, Spruce and carbon. It handles all of them equally well and only needed a slight plate buildup to shoot the skinny carbons. {This is normal due to the smaller diameter and its effect on the center shot riser}.With every combination the ACS is a performer that I have become very fond of. It has more performance than any other bow I have shot and it just plain feels and shoots good.

Often we talk about "stacking", a term that is often misunderstood. The ACS does not stack, and to demonstrate this I will ask that you look at the draw weight chart below. This bow builds up fast and then it progresses evenly to its design specs. On the table below the arrows were marked at 1" intervals for this demonstration. The chronograph had a fresh battery and all shots were taken at the same session. The chronograph used was a "shooting Chrony" Beta model master Chrony.

You may have noticed that the ACS is showing a difference in draw weight from what is specified on the bow. The difference is only 1 pound at 28" {55 on my scale and 54 specified}and this is most likely to be a result of my scale needing to be recalibrated. At any rate I do not feel that this is a concern as one pound is such a minimal difference.

During the time I have had the ACS I have placed it in the hands of many shooters, at the ranges I frequent. The comments I receive are always very positive. I have not received any negative comments about the ACS, and the usual question is "Where can I get one?”. After shooting it and seeing, or not seeing the arrow fly they find it hard to believe the bow is only 54#@28".On one occasion a friend was shooting a 62# recurve that is considered a fast bow. He also has a 28" draw length, slightly more than an inch over me. After trying the ACS he decided to roll out the shop chronograph and see just how the ACS compared to his recurve. Shooting the same arrow I was giving up 8 pounds and 1" in draw length, against a custom recurve. The speeds were exactly the same.! Yes he was impressed, as was I.

The Adcock website is also a wonderful source of tuning information. I suggest that you take time to visit it and see OL ADCOCKS tuning guide. In simple terms he tells us how to make your bow shoot to it's best. This is a must read for all traditional shooters. Also there you will find some very detailed information on the development of the Adcock Cross Sectional limbs{ACS}.


With luck I will be able to take a bear this spring with the ACS and include some photos of the hunt. I have several bows at my disposal to bear hunt with this year but the first bow that I will be taking into the woods for a spot and stalk bear hunt will be the "ACS".I am sure that I will find it as pleasant to cary as it is to shoot. If I did not feel that the ACS was a superior bow I would not use it for a spot and stalk "Bear Hunt".