I have always wanted to try every new item I see , but I also hate to pay big bucks for some things I can make myself. This is where Buckie comes in. I traced a Rezoe decoy on a piece of corplast { Plastic cardboard} and cut out the shape. Armed witha couple cans of spray paint I let my artistic talents  flow and Buckie was born. Now to be honest Buckie looks HOAKIE to say the least. Not really a good facsimile of the real Rezoe other than the shape. From a distance he looks good though. At least to me he does. Because of the heckling and silent smiles I was getting while I made him at the range I was in a corner and had to set him out and go for it. As much as I wanted to believe in my handy work deep down I had doubts, but to not use Buckie I would have to admit to my wife that he was just to ridiculous to use. Now if you know me at all , you realize that this is not going to happen.

Earlier in the Year I was visited by a very good friend that many of you know of. O.L Adcock. The bowyer who builds the ACS longbows I frequently shoot.. In his quiet way he just grinned at Buckie when I proudly showed him to O.L.  I knew what he was thinking. {He is a kind man.}

O.L left a Double Bull blind with me to test when he returned home from our 10 day hunt for moose and elk .I really think he did this so nobody would recognize me sitting behind Buckie. Late in October I went hunting in the "Bowzone" armed with all the comforts of home, a heater, Buckie and the blind to hide in.{ nobody coming by would see who had this ridiculous looking decoy if they passed by.. I hid the truck well {anoniminity}and set out.

Of course I never really paid attention to setting up the blind when O.L showed me how. After all it is just a big pup tent. Thats another story.{ It is easy now, after I followed the directions. }Buckie was next on the list of things to do so after a quick look around I settled on a place to test out the decoy. There were several deer trails leading into a draw that has been productive year after year and the willow clumps scattered there would support Buckie for me.

I cut off a willow and pushed Buckie on to the stake where it made a Y to keep him upright. Now the wait begins. I did some rattling and grunt calls, a few doe calls etc all morning. Not to much was happening. A couple does were beside the blind at one point and I never heard them come in so when I peeked out the closed window on the back side they spooked.

They were eying up Buckie.. And they were not afraid of the blind. The day had potential after all. At least they were not terrified at the sight. It was time for coffee and a bite to eat , this meant digging thru the pack and totally messing up the inside of the blind. Now we all know this is when game arrives. Today was no exception. With a thermos open and a cup half filled I looked out the shooting screen to see a very good buck { They are all very good to me } walk down the far bank about 50 yards away. I was going to grunt to get his attention but as luck had it nothing was in reach or in site due to the mess I created in getting a snack.

With feet tangled in Pack straps and the stool, I had  to turn around, find the bow, shooting glove arrow etc and be quiet at the same time. No easy feat with mega Adrienne flowing. This is when the real buck saw Buckie. He Froze, every hair on his body bristled and he glared at the $3.00 wonder that had invaded his turf.

Walking stiff legged he turned and came into the old slough bottom , he walked behind Buckie and gave a willow clump a good thrashing only 10 feet from Buckie. This was to good to believe. He was not scared off, he was incensed at the sight before him. All this time I was trying to get into some sort of shooting position without waking the dead.  OK I am ready but the deer is not in a shooting position. He scrapes and leaves a scent mark in the scrape. If fact I think he tried to fill the scrape, as it took longer for him to do his business that a guy that just drank 10 cups of coffee.

Now the stand down begins. The buck puffed out every hair again and glared at poor little Buckie. I could see his rage building at the non response he was getting. This went on for about 2 minutes , and the buck was becoming visibly agitated at being ignored. Buckie was just staring back and not batting an eye. It was unbelievable to watch the stare down take place. I thought I would never be able to stop myself from laughing. Finaly the Buck started a stiff leg walk behind Buckie. There was a good wide shooting lane he would have to go thru but as luck had it he never stopped. I was ready for the first shot opportunity , but it did not happen yet.

Passing a small clump, he froze again with a good lane open. Now was my chance to shoot before Buckie got thrashed  and the gig was up. By now I was getting very nervous, but the light draw weight of the bow, 50# was easy to overcome. This was the first shot at a real animal from the blind , and thru the shoot thru netting in the window. That made the shot even more questionable. There was no time to make changes now and the practice arrows I shot all flew true so I released a heavy carbon thru the screen. It flew like a laser , high I thought. How can this be. I must be to old for buck fever. Then the loud whack , it sounded just so familiar. That solid sound of Poplar. Frozen poplar. The deer did not seem overly alarmed and trotted off back to where he came from.

This was an easy shot even for me. 20 to 25 yards. On a big bodied deer should be a cinch. Time to retrieve the arrow. It should be an easy thing to do, I heard it hit the tree and the bank behind the buck would make the shaft stick out in plain sight. After a few minutes looking I still can not find the arrow I saw fly over the deer's back. I am sure I am in the right area and then I see it. Not the  arrow, Blood. Just a drop where the buck stood. The line was good but I was sure I missed high.. A few more spots of blood and then the trail was clear. Massive splashes on the ground and 3 feet up the trees and willows.

There was no need to do the wait thing. This deer was going nowhere in a hurry. 20 yards and the arrow shaft is on the ground missing the broadhead and about 6 of shaft. The place I was hunting has a trail that is 10 yards from the road and this is where the deer lay. An easy retrieve is an understatement. 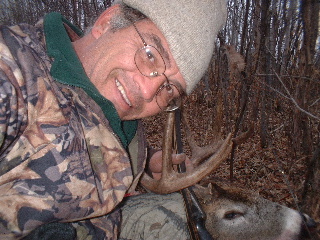 {Self portraits are hard to take.}

{Buckie and the first victim}

Now I have 2 choices, back the truck up the trail and load the deer or drag in to the road. Actually I could have towed him to the road with the ropes I had too. It was in plain sight. Giving the situation at hand careful thought it seemed best to gut the deer, pack up the blind and go for the truck. I parked on the road beside the deer pulled him out behind the truck. This is a heavy body deer and the loader I have in mind is not built yet so it is going to be a hard job alone if I can do it at all. Its a long way up to the bed of the ¾ ton .

As we get older we get smarter I think. I hope so. Now considering it is hunting season there has to be hunters driving around in the early afternoon, or possibly a farmer. Farmers dont mind dead animals. It only took 5 and minutes , half a cup of coffee ,and a car abruptly stops. Nice deer I hear, did you shoot him with that bow? After a short conversation I determine this is a good guy to ask for help.{ this was the plan from the start} Sure, lets load him up he says. Music to my ears.! It worked. definitely I made a better choice than moving the truck up the trail and loading him alone.

To say this was an experience to remember is an understatement. It was fantastic. I learned some things about deer behavior, and I also learned that a deer in rut is not as particular as we think he is when it comes to defending his turf. {At times they are not to smart either .} Buckie works, and at a price like that everyone can have one. The blind worked great, I did not bush it in as that seemed dumb to me. Why have a blind and then build a blind around it?  The deer never even looked at the blind, and the does  were within feet of it when I spooked them. Shoot thru netting does not hinder arrow flight with sharp broadheads.If  I was in my typical ground blind like I usually make on the spot I would never have been able to get moved around to make the shot without spooking the deer. It is easy to sit for long periods on cold days in a blind with a small heater. You do not need to have the perfect decoy to have it work. Buckie did just fine. I was shooting one of OLs ACS-CX longbows , 50# at 28 , 62 long. I love it. The arrows I was using were Easton Epics 340 spine weighing 636 grains. These have 100 grain brass inserts, + 100 grain steel broadhead adapters, + 175 grain Tusker Aztec glue on broadheads. That's a ton {350 gr } extra front weight . I fletch these with 5 ½ Banana cut fletches . This combination gives the heavy arrows a launch speed of 175Fps, that is very easy to draw and shoot . Hunting with Buckie has changed the way I will be doing things next year. When it is time to sit I will do it in comfort and Buckie will be on guard.

I made moose and Elk decoys the same way as Buckie . They have yet to take their first victim.

Elie the Elk decoy I made

"Welcome to my outdoor world"